a company of mueller industries > 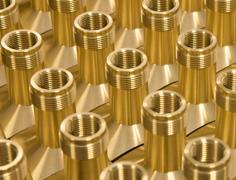 Home » About The Company » Company Overview

• 1940’s - Expanded valves, driers and components for the HVACR industry.

It was in the early 1970’s that a facility was acquired in Hartsville, Tennessee to specifically produce refrigeration and air conditioning subassemblies. Though originally an assembly operation, by 1976 the facility had also developed into a machining operation. With a dedicated Sales and Production Engineering staff, substantial growth continued through the additions of product lines, an in-house testing laboratory and tool manufacturing capabilities. This facility became the cornerstone of what would be Mueller Refrigeration.

Mueller Refrgeration was officially designated as a division of Mueller Industries, Inc. in 1990. Current manufacturing operations are located in Hartsville, Tennessee, and Changzhou, Jiangsu, China. Mueller Refrigeration continues to be a global leader in the production of components for the air conditioning and refrigeration industries. Products today include such items as CYCLEMASTER® ball valves, compressor valves, relief valves, check valves and various system protection devices.

Mueller Refrigeration prides itself in being a quality manufacturer of valves, components and value-added assemblies into the HVACR market. Globally, the company provides diversified products achieving growth and top performance through excellent customer service, creative and innovative achievements and maximization of core manufacturing capabilities.